Aurora Invested in High Tide Inc. (CSE:HITI) (OTCQB:HITIF), Should You?

Aurora Invested in High Tide Inc. (CSE:HITI) (OTCQB:HITIF), Should You? 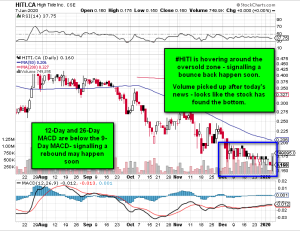 High Tide Inc. (CSE:HITI) (OTCQB:HITIF) had a correction in the past few months due to broader sell-off in the sector. However, the sell-off in the stock was on low volume. Moreover, looking at the key technical indicators like RSI and MACD, HITI stock is oversold.

Today, the stock had nice volumes and saw intra-day buying activities. So, it may not be surprising if the stock continues to witness increased volume and a quick recovery in the coming sessions.

The rapid growth in the cannabis industry has been one of the biggest stories of the past few years. Plenty of promising companies have stepped up during this period, and one of the most promising is High Tide Inc. (CSE:HITI) (OTCQB:HITIF).

High Tide has already been in the cannabis space for more than a decade. Based out of Alberta, Canada, High Tide is a retail-focused cannabis firm with incredible experience in the cannabis business. Due to this, as well as the presence of an unrivaled management team, the future looks very bright for High Tide.

High Tide Inc. (CSE:HITI) (OTCQB:HITIF) started its operations back in 2009 as a smoke shop catering to cannabis connoisseurs. Over the years, it built up its business to become one of the best-known and most beloved retailers in Canada. High Tide is also involved in distributing and has produced specially manufactured products in partnership with major brands.

Some of the company’s associations include Snoop Dogg and Paramount Pictures, among others. The company has also branched into wholesaling high-quality cannabis accessories.

Aurora and Aphria Have strategically Invested in  High Tide

Perhaps the most important thing for potential investors to note is that two of the biggest cannabis companies have made strategic investments in High Tide. The companies in question are Aphria (APHA) and Aurora Cannabis (ACB). The presence and confidence of such massive cannabis companies will only help High Tide in growing rapidly over the years to come.

Currently, High Tide Inc. (CSE:HITI) (OTCQB:HITIF) has 27 branded Canna Cabana stores, plus 3 KushBar stores, which are all focused on cannabis retail. In addition to that, High Tide also has 11 Smoker’s Corner outlets (7 franchises, 4 corporates) where customers can buy smoking accessories.

On top of that, in late 2018 the company purchased Grasscity.com – the world’s best online headshop.

This sort of retail network, and the sheer variety of products that it has available, has made High Tide the go-to retailer for cannabis enthusiasts all across Canada.

High Tide’s growth trajectory over the past decade is now well established and on Tuesday, the company made another major announcement. It announced that it has managed to get a credit facility worth $10 million that will be deployed towards the expansion of High Tide’s facility in Ontario, among other uses. The agreement was reached by the company with Windsor Private Capital, a merchant banking institution based out of Toronto.

The credit facility of $10 million is senior secured and non-revolving in nature. It is a major development for High Tide, which managed to be the first recipient of Windsor’s investment in the cannabis sector. The company is going to use the money to reach its operational objectives in 2020.

As investors know, the cannabis industry is still at a relatively nascent stage, but High Tide is one of the veterans of the industry, having been established in 2009.  This puts the company in a strong position to ride the incoming green wave and grow significantly in the near term.

Any investor who is interested in the fast-growing cannabis sector would do well to track the growth of this company closely in the coming months. It’s also worth looking at its recent performance.

In its most recently reported, that being the third quarter of 2019, High Tide managed to generate revenue of $8.3 million, which reflected a year-on-year rise of 281%. And seeing as 2019 was a difficult year for the cannabis sector in Canada, this performance from High Tide is an indication that the company can be viewed as being able to buck the negative trends of the cannabis industry.

It’s clear that High Tide Inc. (CSE:HITI) (OTCQB:HITIF) is moving in the right direction, and with investments from companies like Aphria and Aurora Cannabis, High Tide is expected to continue growing its business by boosting the number of retail store counts in 2020. Investors would do well to keep an eye on High Tide in the coming weeks as the cannabis sector expands further.